The Youth Impact Program at Syracuse University in its second year served 102 at-risk youth. This program had a number of youth (13) who were returning from the prior year’s program and were able to act as young mentors and role models to the other youth.

Much like other communities in which YIP has worked, the risks that inner-city youth face in Syracuse are significant. According to a recent Children’s Defense Fund report, 50% of all people in Syracuse are low-income, and fully a quarter (25%) lives in poverty, as compared to only 14% in the rest of New York. The situation is worse for children, with more than a third of all Syracuse children living in poverty and more than half of African-American children living in poverty. Fully 40% of the population is eligible for food stamp assistance. Living in this high-need area has serious consequences for the youth of Syracuse, and a half (49%) fail to graduate from high school.

The program is an integrated partnership between the local community, Syracuse University, the municipality of Syracuse, and the NFL to make a difference in the lives of young, urban, minority at-risk boys that will benefit the entire community.

The program is staffed by a cadre of experienced staff and motivated young student-athletes. After a great press conference in June, the Syracuse YIP was welcomed to campus by Athletic Director Dr. Daryl Gross, Head Football Coach Doug Marrone, and Congresswoman Ann Marie Buerkle. Highlights of this program included the Syracuse University Dean of Libraries mentoring and advising the camp. Additionally, in collaboration with Lockheed Martin, its employees were given time to visit the YIP campers and build some basic rockets and perform other simple science experiments to pique their interest in the world of engineering and applied sciences. YIP looks forward to future involvements of this type and is very interested in pursuing a Science, Technology, Engineering, and Mathematics curriculum for future years. 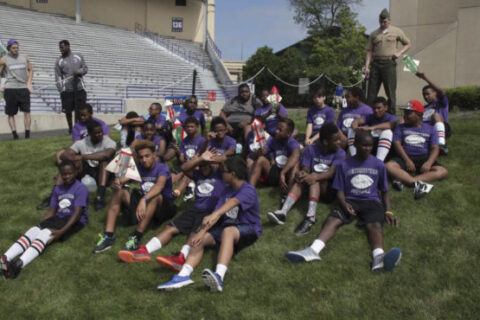